Chelsea Wine Bar near NASA JSC celebrates the installation of an ISS-Above on April 8th, 2015 5pm

April 8th will be a very special day for the Chelsea Wine Bar in Houston and for the ISS-Above, a little device invented in Pasadena CA, that connects people to the International Space Station (ISS) in a unique and compelling way. A public installation of the ISS-Above will be completed in time to toast NASA Astronaut Scott Kelly, recent addition to the ISS crew, as he passes by 260 miles overhead in the ISS at 6pm and then later at 7:30pm.

In an article by the Wall Street Journal Bill Nye The Science Guy said this about his ISSAbove:

“My most recent obsession is: this gizmo called ISSAbove that tells you when the international Space Station [ISS] is overhead. It’s linked to the cameras aboard the ISS, so you can run an HDMI cable to your television and see the Earth from space. I do it all day. I leave it on more than is reasonable. It’s just a beautiful thing.” 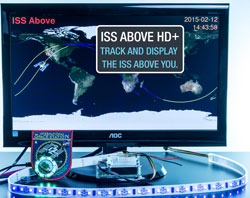 That same special experience is coming to the Chelsea Wine Bar, which overlooks the tranquil water of Taylor Lake in Houston’s NASA/Clear Lake community (just a few miles from Mission Control for the ISS at NASA Johnson Space Center). The front door, emblazoned with dozens of NASA mission patches, marks how special a place this is for anyone involved with or interested in NASA. It’s not uncommon to see a gaggle of NASA Astronauts winding down with friends after work. As of Wednesday April 8th 2015 Chelsea Wine Bar will have its very own ISS-Above plugged in to a big-screen TV for patrons to enjoy live views of the Earth from the ISS and to know when it is passing nearby.

Jenni, General Manager of the Chelsea Wine Bar said, “We’re excited to receive an ISS-Above from Liam. We get many NASA team members and their families at the Chelsea and I think of it as a gift to them to show how much we value being part of the NASA family.”

“This will allow customers to have a unique connection to the ISS and the astronauts up there,” said Liam Kennedy, inventor of the ISS-Above.  “For the next year a good friend of Chelsea Wine Bar is calling the ISS his home.  Customers will be able to raise a toast to Astronaut Scott Kelly EVERY TIME he passes by Houston – some 260 miles above. Scott has necessarily given up having steak or wine for the next year – so there will be a special toast, remembering that he cannot enjoy those comforts of home for a full year.”  #YearInSpace

The ISS rises above the horizon up to 8 times every single day. Said Kennedy, “That’s probably much more often than most people think. It has you marveling at the amazing human achievement that the ISS is.”

In October 2013, Liam Kennedy used his skills in coding, video production, live video-streaming and amateur astronomy to create the first ISS-Above. There are now close to 3,000 ISS-Aboves worldwide tracking the International Space Station, delighting and inspiring people of all ages by displaying live video views of the Earth from the HD cameras on board the ISS, tweeting and keeping their owners in touch with everything that is going on with the ISS. Although the ISS-Above is a very geeky gadget – it is easy to install by anyone (you don’t need to be a rocket scientist to set one up).

The ISS-Above is a single board computer device (based on a Raspberry Pi). It was a featured presentation at the 2018 ISS R&D Conference following a successful implementation in middle schools across the USA. ISS-Above started as a fun project for Liam’s grandchildren, got funded through Kickstarter after lots of requests from people wanting one. Today, there are thousands in homes, offices, schools and science centers all over the world.